UN unveils memorial and honours all those who served

DILI, 29 August: The United Nations in Timor-Leste has on the anniversary of the Popular Consultation encouraged people to keep working towards a brighter future for the country.

At a speech unveiling a memorial plaque at UN House in Dili, the UN Resident Coordinator Roy Trivedy honoured the nearly 50 people who died while serving as members of the UN family, including 15 Timorese people.

''I am pleased that we can be joined today by so many who served the people of Timor-Leste in difficult and often painful quest. These are people who never lost sight of the light which came slowly, like the morning dawn rising over these hills here at Dili.''

Today we unveil a simple plaque which reminds us of the sacrifices made by those working for a better world for all through the United Nations family.

Nearly 50 United Nations staff, including 15 Timorese UN people, died in the past 20 years.

People like Ana Lemos, a mother, a wife, an independence activist who worked as a UNAMET polling officer in 1999. She was kidnapped and murdered without ever being able to celebrate with her family and friends what she had been fighting for.

13 other UNAMET staff from Timor-Leste were killed in that difficult period and one died of a heart attack on 14 September at the UNAMET compound.

We remember too the five Korean peacekeepers who died, swept away by a flash flood in Oecussie.

In West Timor three staff of the UNHCR were killed by militants. These were peaceful, unarmed humanitarians who gave their lives trying to help those who had lost everything.

And we think of the people who died of illness while far away from their homes and loved ones.'' 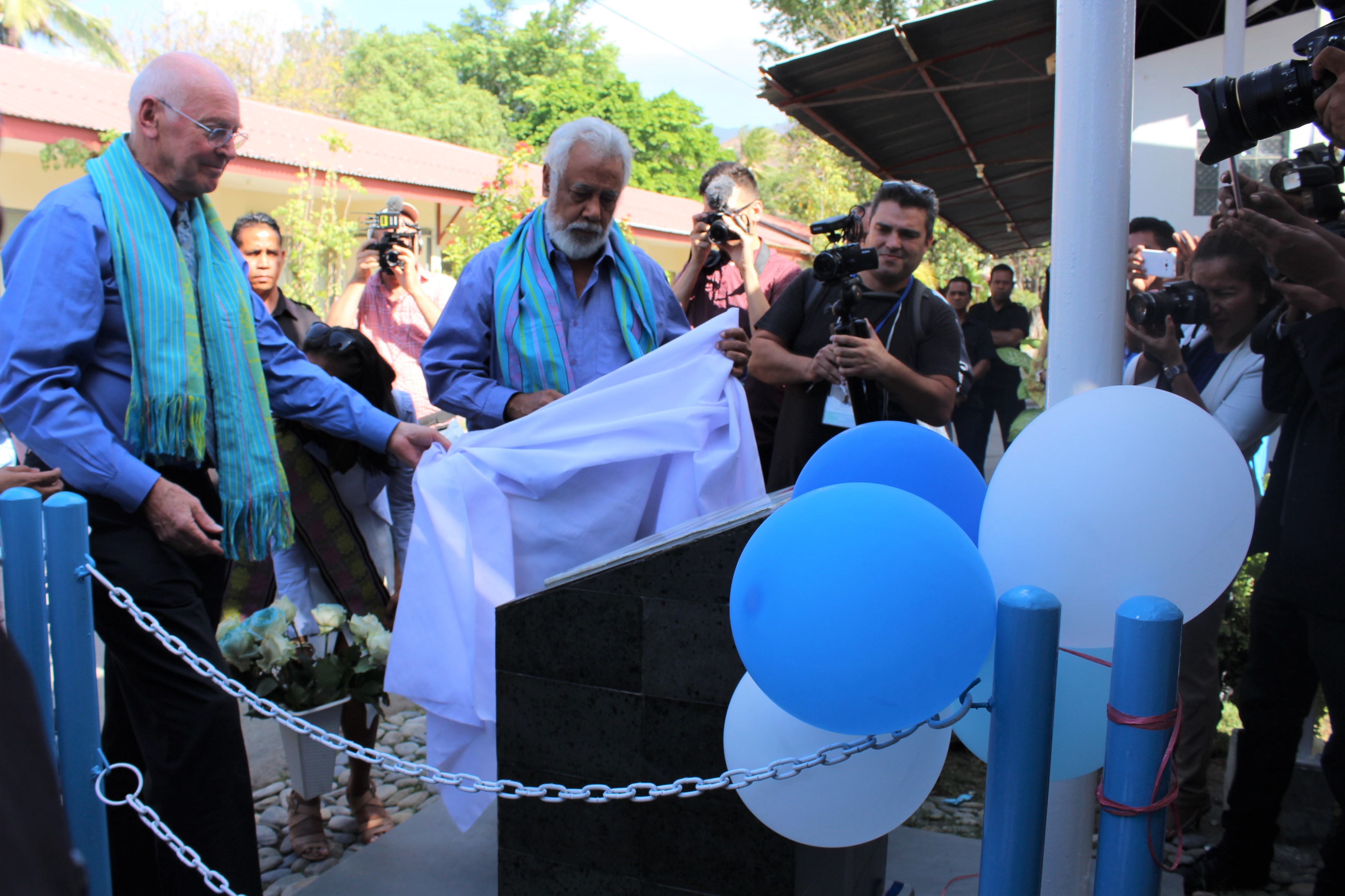 Ian Martin and Kayrala Xanana Gosmao who unveiled the commemorative plaque honouring all who have died in UN service in Timor-Leste.

Attending the event were Kayrala Xanana Gusmnao, and the Special representative of the United Nations Secretary General, Ian Martin, who together unveiled the memorial.

''Today is an opportunity too, to recall another human rights champion and head of UNTAET the late Sergio Vieira de Mello who led the transition of East Timor to democracy and long-term stability, but who died on 19 August 2003 along with 22 colleagues when the United Nations headquarters in Baghdad was attacked.''

''As I look around today I see many inspiring colleagues and friends. I see some of the older faces – Timorese leaders, former UNAMET staff who have returned to the country after nearly 20 years. I see many of the UN’s partners in Timor-Leste, and colleagues currently serving at the UN in Timor-Leste who have given valuable and faithful service.

''I am aware that every person here has their own personal stories that they can share of service and leadership for a greater cause.

''The term ''service’’ is epitomised by Ian Martin who has served a distinguished and very long career in support of the UN and human rights everywhere – Europe, Africa, Asia and of course here in Timor-Leste.

''Ian was Head of UNAMET which in its initial period was besieged by militants, and which despite all of the challenges stayed beyond reasonable limits, before being temporarily evacuated.

''He brought his team back,  and with humility and a strong commitment to human rights, oversaw the progress towards independence day, 2002.  Ian’s is a life-time of service in the field of human rights, peace and development.

''Ian and two other UN diplomats, Tamrat Samuel and Francesc Vendrell, will this week be honoured with the Order of Liberty Award, by the Portuguese President.

''Francesc Vendrell ​​is considered to be the United Nations official who has been following the issue of Timor-Leste for the longest time. He  played an important role in the production of the eight General Assembly resolutions on Timor-Leste, passed between 1976 and 1982, at which point the issue was gradually disappearing from the attention of the community of nations.

''Tamrat Samuel, for his part, was,  between 1992 and 2000 the UN Secretary-General's focal point for the “Question of Timor-Leste” and was involved in the lengthy negotiations between Portugal and Indonesia that culminated in the May 5 agreement of 1999, which allowed popular consultation 20 years ago.'' 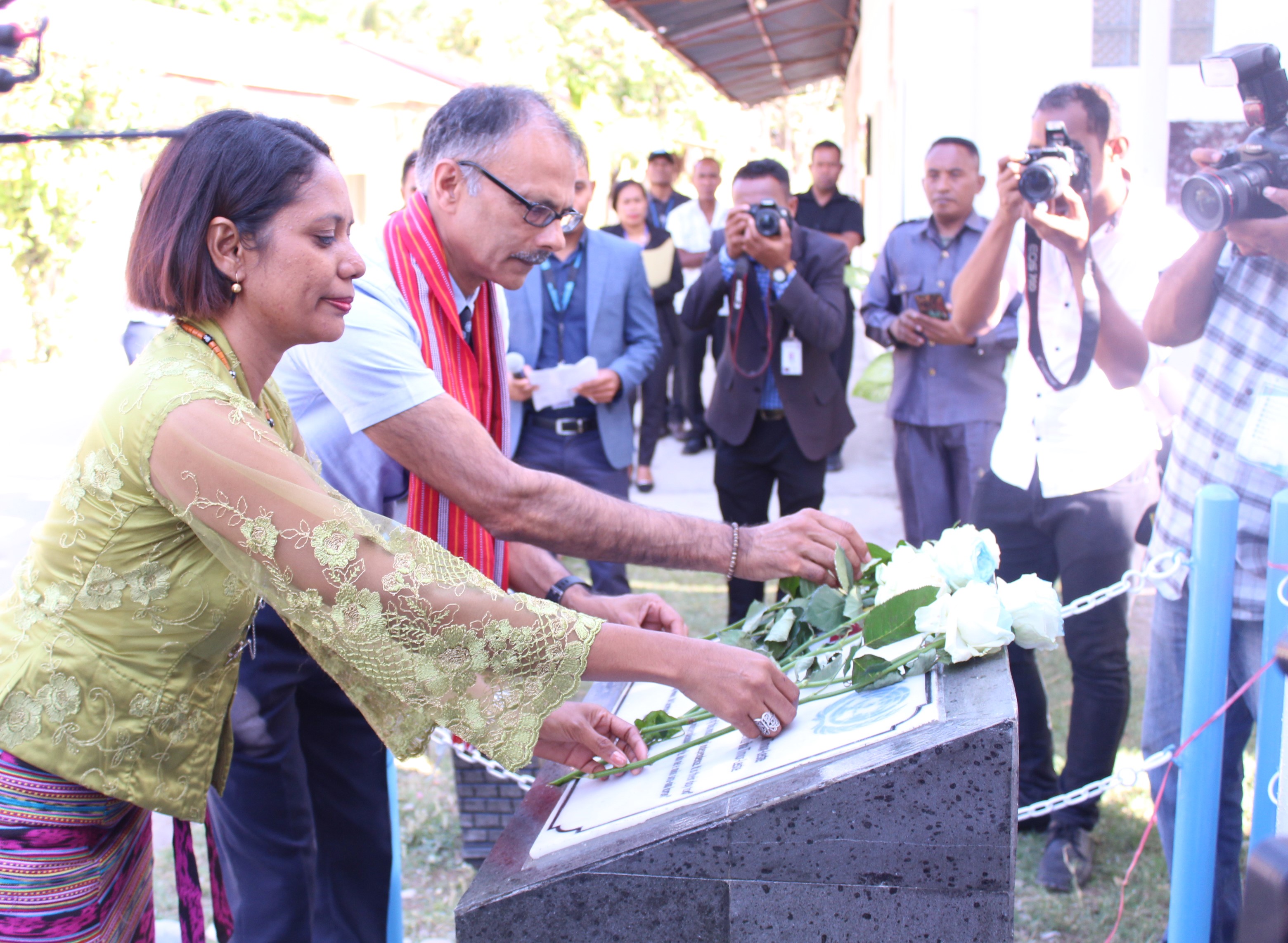 Mr Trivedy also announced the meetings rooms at UN House would honour two people who have been part of the heroic struggle in Timor-Leste - the late Ana Lemos who was killed in 1999 and the former Secretary-General, the late Kofi Annan.

''Kofi Annan, Ana Lemos, Ian Martin, Francesc Vendrell, Tamrat Samuel and Sergio Vieira de Mello are people whose selflessness, whose personal sacrifices and dedication continues to inspire us all as we create opportunities for peace, eradicate poverty and serve the cause of sustainable equitable development. These are the people who were at the dawn of a  new era in  Timor-Leste, waiting to be warmed by the sunlight over the hills.''

Kayrala Xanana Gusmoa was greeted warmly by more than 500 people who attended. He thanked the UN.

Mr Martin read ad the names of all 14 Timorese people who died in service, and then introduced Pedro Unamet Remejio, who was born at UNAMET headquarters in 1999. 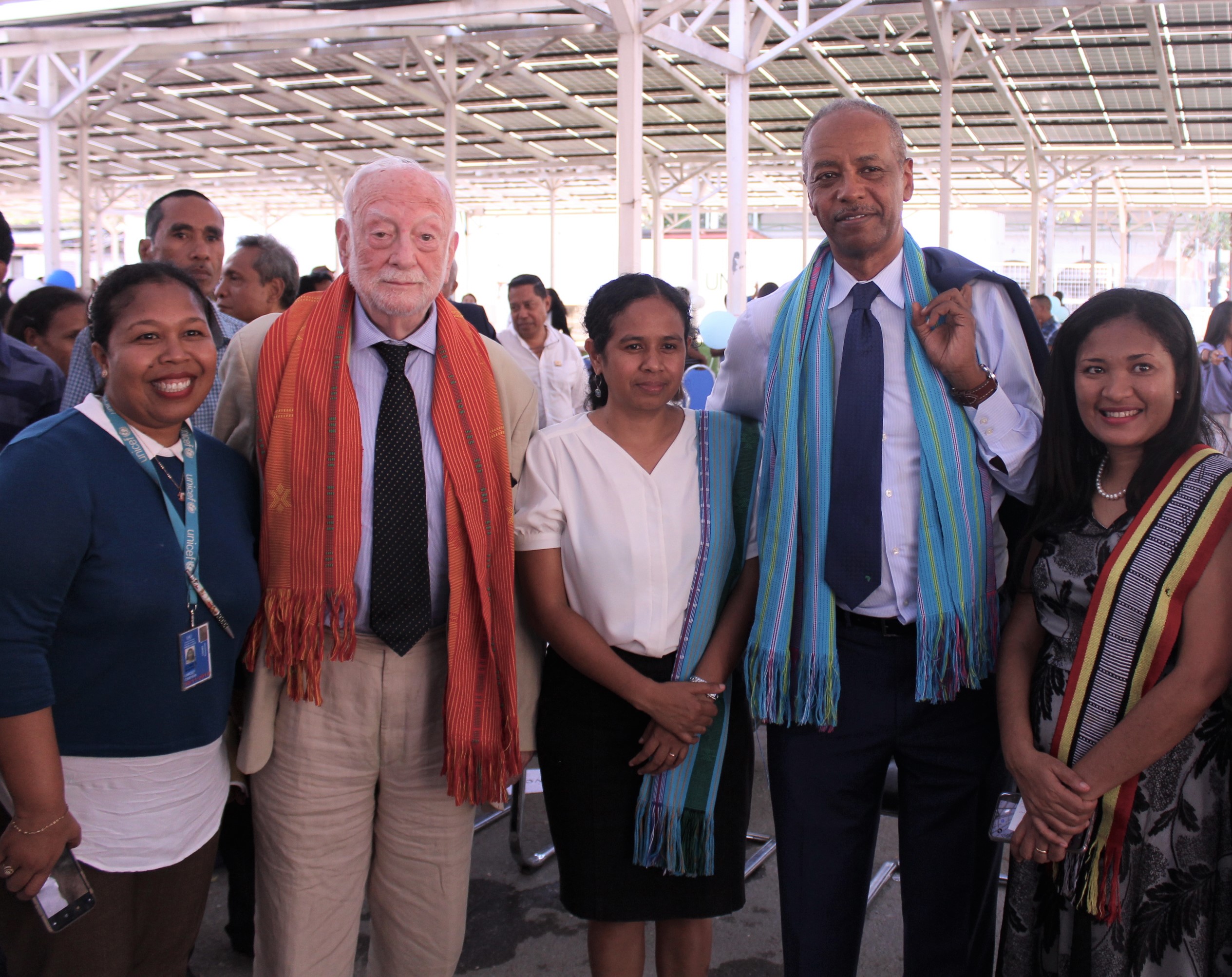